When Google announced their page experience update in 2021, the team at SimulTrans got worried. Their aging website performed poorly on all of the metrics Google would be adding to their search algorithm, threatening the traffic they relied on to drive new business.

SimulTrans is a quality-focused translation and localization provider. They translate documents, software, websites, audio, video, and eLearning content into over 100 languages for enterprise businesses.

SimulTrans has been operating since 1984, and many of their client relationships stretch back decades. They had an established brand and, in pursuing a new website, wanted to make sure they could maintain the spirit of their messaging and visual identity.

At the same time, they knew changes had to be made to achieve faster speeds, improve SEO performance, and bring their web presence into the future.

SimulTrans turned to Salted Stone for help strategizing, writing, designing, and developing their new website, which launched in June 2022.

“Last year, Google told us they were not happy with the speed of SimulTrans’ website and were going to start penalizing it in search results. It was hosted in HubSpot’s original CMS platform, weighed down with legacy code, and groaning with the aches and pains of a geriatric five-year-old. Although I was loath to admit it, our customers and prospects were even less impressed by our company’s aging web presence.”

SimulTrans’ existing website was built on the earliest version of HubSpot CMS, and performed poorly. Tested with Google’s lighthouse tools, the site received a mobile performance score of 35 out of a possible 100.

Sure enough, SimulTrans’ traffic began to drop after the update took effect. This impacted their lead volume and reduced the ROI of their inbound marketing efforts.

Performance wasn’t the only issue. The website was beginning to show its age in terms of design and content. However, the SimulTrans team was hesitant about pursuing a full redesign, as they worried about the impact of straying too far from their well-established and recognizable brand.

After vetting several options, SimulTrans selected Salted Stone for our experience with HubSpot CMS and thorough, process-driven approach to website projects. Their goals for the new website were:

"I explored numerous options, including doing the work internally, buying a pre-made theme, hiring independent contractors through a crowdsourcing website, or selecting an agency. Our friends at HubSpot heard about our challenges and gave us a glowing recommendation of Salted Stone."

Salted Stone began with our website roadmapping process, in which we learned about SimulTrans’ goals, audiences, competitive landscape, technical requirements and user preferences. Following a series of workshops, we created a complete sitemap with a detailed information architecture for the new website. This enabled accurate scoping and acted as a guideline throughout production.

With approval on a scope of work for the website project, we proceeded with content, design, and development.

With input from SimulTrans, we wrote content for each of the pages in the sitemap. During this phase, we identified SEO keywords and included them strategically throughout each page. This research also guided our decisions related to page titles and navigation (for example, when choosing between the interchangeable terms “localization” and “translation”, we selected the term with higher search volume).

In addition, we were very careful not to sacrifice any of the keywords for which the existing site already ranked, maintaining copy and metadata where necessary.

Knowing that the site would be translated into several languages using their own tool through a Hubspot integration, we ensured our copy was localization-friendly with help from the experts at SimulTrans. That meant eliminating most acronyms and idiomatic expressions and using simple sentences when possible.

Translations from SimulTrans' tool are automatically imported into HubSpot as multi-language groups and ready for publishing.

SimulTrans and Salted Stone agreed to “elevate” the existing website styles, rather than redoing them completely. While SimulTrans liked their styles, much of it wasn’t up to Salted Stone’s standards for beautiful and responsive web design.

Lead designer Sal Castrejon worked closely with the SimulTrans team to agree on what pieces of the brand would stay, what would be elevated, and what new elements would be needed.

The result is a design language that feels fresh and modern while still utilizing what worked best about the classic styles. Some elements, like fonts and colors, remain similar. Other elements, like the symbols that appear in the backgrounds of some modules, are derived from assets SimulTrans used in the past. Finally, Sal created net-new elements, like the line motif which guides users through each page.

We also created a guide to help the SimulTrans’ team select stock photography for their blog posts and other parts of the website to ensure brand consistency.

Keeping in mind SimulTrans’ performance goals, our development team led by Karen Cagape and Raymond Añana developed each module and page in accordance with best-practice guidelines from Google.

Achieving such a high performance score involved some sacrifices. To maximize Core Web Vitals scores, the presence of certain elements like animations, interactive modules, and videos had to be minimized.

This flexibility came in handy when SimulTrans requested variations of the site be built to accommodate some of their translations, which would differ slightly from the English-language version.

Throughout the process, weekly meetings led by Nemesia Garcia and Alexis Arce from our Client Services team kept the project flowing smoothly and on track to be completed by the client’s deadline.

This project required close collaboration with our points of contact at SimulTrans, President and COO Adam Jones and Director, Global Marketing Margarita Núñez. Every week, Nemesia walked Adam and Margarita through each deliverable, gathering live feedback and keeping the whole team accountable.

We also led a comprehensive punch process, which helped ensure there were zero errors on any device or browser when the website was eventually pushed live. The launch itself was completed in six phases accounting for the main site as well as foreign-language translations in Spanish, Japanese, German, Arabic, and French.

The new SimulTrans.com exceeded the client’s expectations and met all of the goals agreed upon at the outset of the project.

“Thanks to Salted Stone’s efforts, it turned out far better than I initially hoped or expected. Not only is the site meeting Google's goals with a considerable improvement to Core Web Vitals, but it is also resonating with prospects. The number of website visitors has increased, the bounce rate is down, and the session duration is up. We received twice as many inbound opportunities the month after the website launched than the month before; some have already become customers, and others are reviewing significant proposals.”

Performance on Core Web Vitals was well above the benchmark, coming in at 85 out of 100 on mobile and a blazing-fast 99 on desktop. This performance, combined with the SEO-optimized site copy, will help SimulTrans maintain and improve their SEO as time goes on. 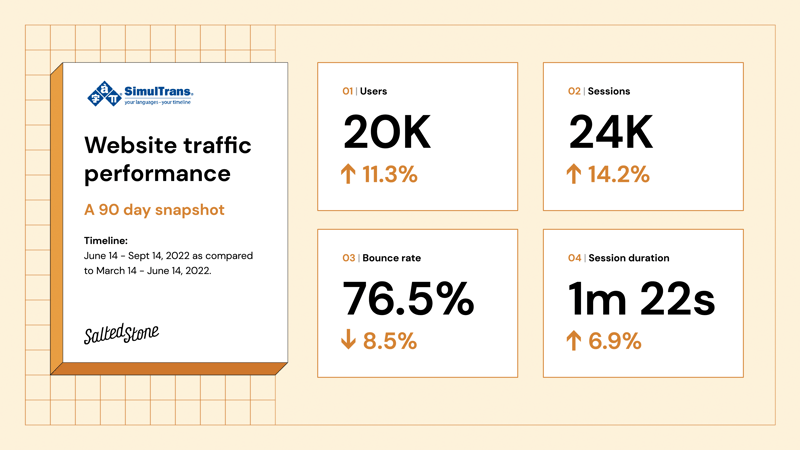 In terms of the design, SimulTrans was so pleased with the elevation of their website styles that they hired Salted Stone to apply similar branding to their slide deck template used in marketing and sales activities.

This project was a true partnership, and the relationship between SimulTrans and Salted Stone is just beginning. We’re excited to collaborate on new projects in the future.